I wanted to take part in the Berlin UrbanHamRadio activities with my own equipment. But I did not want to buy a new TRX for portable usage. My iCom IC-7000 is more or less portable – at least it fits in my backpack and can be powered with 12V. 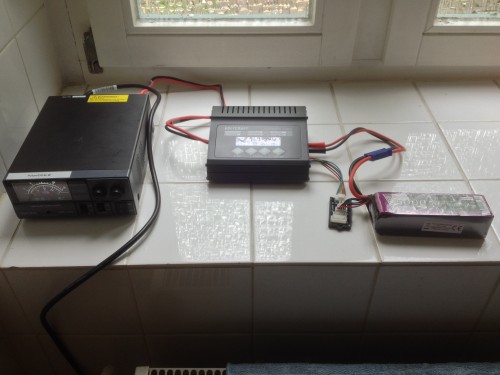 The LiPo is equipped with an EC5 plug, so I soldered the proper pins to the power cable for the IC-7000. The good thing about this LiPo: it can release up to 20 times its capacity as current. This is a 5Ah battery, so it can provide up to 100A for a short period of time. With RC racers this is needed for the start-up momentum. But I can also have some advantage during TX, when I want to use up to 100W of the TRX. Although the IC-7000 drains up to 22A at 100W transmit, I’m far away from any unsafe usage.

Talking about battery drains. Unfortunately the IC-7000 is equipped with a bright LCD and a lot of circuits. It’s far away from low power consumption. In idle receive mode it drains about 1.5A. With a battery of 5Ah I can use that for a bit more than 3 hours. Time drops rapidly with every transmit. 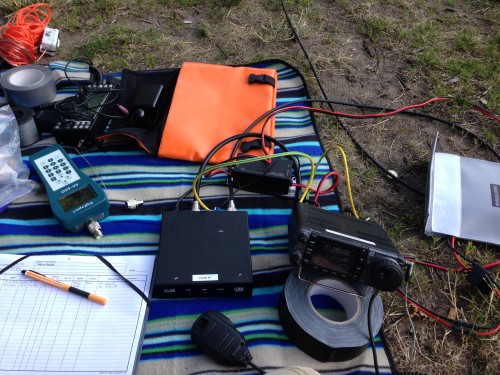 But it was time enough for several nice afternoons in the park! The small LEDs on the battery pack signal the remaining capacity. And we were lucky enough to bring a second battery pack just for the single time, when we wanted to end this QSO with Cornwall.

Unfortunately all the needed equipment is not portable enough for climbing on mountains. I need at least the IC-7000 (2.5kg), the battery pack (500g), the power connector (500g), probably the external tuner (700g), antenna and cables (4kg). So already about 10kg of stuff. But it’s okay for the city and carrying around on my bike and having a nice Sunday afternoon in the park!