Five years ago I bought a new battery pack for my Alinco DJ-V5 portable 2m/70cm device. Unfortunately the batteries became dead again during summer. I could revive the batteries with putting them in the freezer for 30 minutes, but they did not last for long. Even two of the eight cells were completely dead, as the voltage dropped from 9.6V to 7.2V.

So I opened the battery pack with a scalpel. It was heavily glued and it took some time. I had to be careful not to destroy the sides where the hinges for mounting the battery pack are located. In the end I found out, that there are some special cells built into this EBP-46N battery pack. 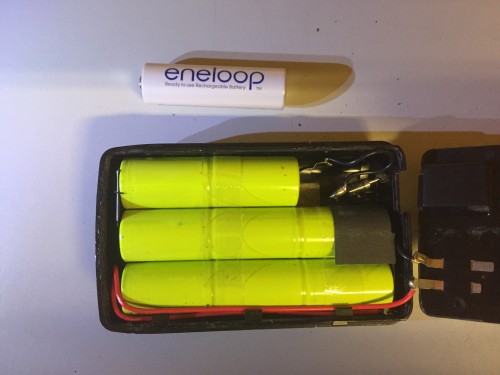 They are way smaller than a standard AA cell. I could probably install 5 AA-eneloop cells rotated by 90º, but then I work with 6V only. This is enough for the TRX, but the output power will reduce from 6W to roughly 3.5W.

I then found out, that there are AAA-eneloop cells with soldering tags available, which I instantly ordered. I wanted to try, if I could put in 8 AAA cells. Then I will have 9.6V again, but the electric charge will drop from around 2Ah with AA-cells to “just” 800mAh. On the other hand, the original battery pack provides 600mAh when it is new. And another advantage of eneloop batteries: they will not loose their charge by not using the device. So I can charge the batteries and keep the device laying around for the moment I want to use it!

I removed the old cells and soldered the eneloops in zig-zag style. The distance between the cells is needed, so that they can fill out the space a little bit better. The pack is too small in height to carry two layers of AAA-cells on top of each other. I also put in some double layered tape in the bottom to keep the cells in place.

It looks a bit ugly, but now the cells fit into the case. I did not glue the case, as I want to use a special battery loader instead of using the built-in charger electronic of the Alinco DJ-V5. I tried it and it works, but I could not find a charger which will properly charge the batteries to their full capacity.

So charging the battery pack looks a bit experimental. 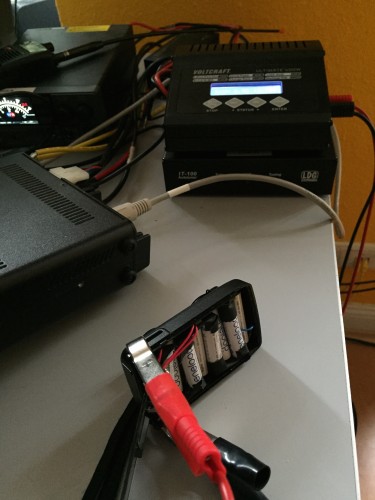 So far I could use the device for roughly 24 hours keeping it on in RX mode without the battery saver enabled. It was switched on all the time and I had some QSOs with high power output. This modification was a success!