After a long day of work and 1000km in a new car, I finally arrived at our contest location in Büren. Seven other operators were already at the site and gave me a warm welcome.
First I needed to get rid off my suit and set up my tent in a short period without rain. After the delivered pizza food I gave out the QSL-cards. The situation looked like Christmas or a family gathering: everbody looked through his cards and showed the best to the others 🙂 I felt like at home and at a place where I belong to.
The shack is not that large, but cozy and well equipped for the contest. 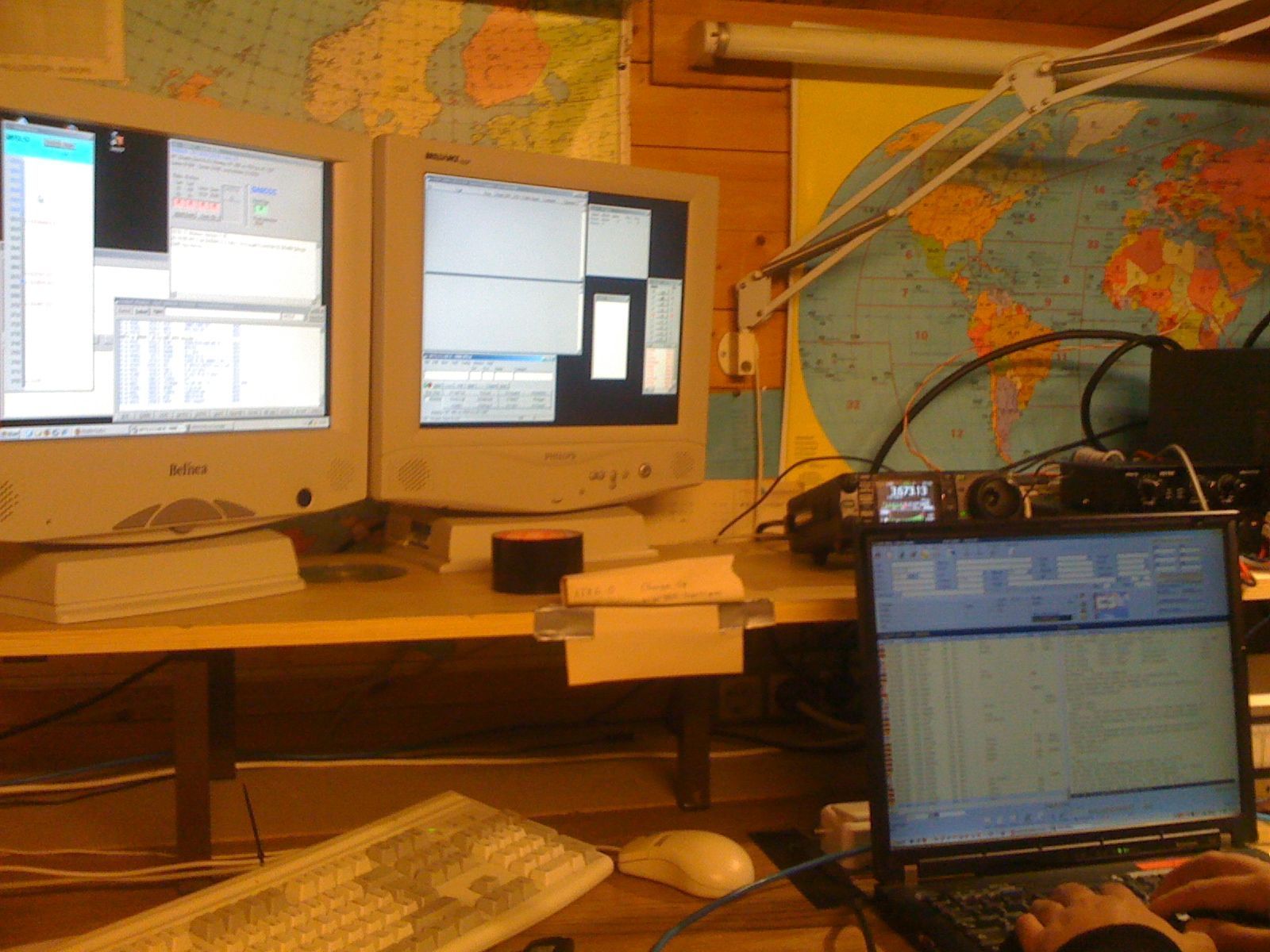 Yesterday evening I received a message from DO3BOX who asked me, if I can receive the Echolink entry point in Leverkusen DMØZAL-L on 423.850 MHz. Unfortunately I was in a basement at that time and so I had to wait until I get home.

The primary function of Echolink is known to me. But I never used it with a real transceiver, only with software from a PC. I read some websites about how I can reach the station with my transceiver and found out, that most of the Echolink entry points are working on simplex-mode at the HF-side (which makes sense…). I tried to reach the station, but got no reply. How should I provoke a signal from the station?

After some time the station sent out its callsign in CW. But I wanted to hear some „real“ voice! I searched at the net for an Echolink-software for my Laptop, a MacBook Pro with Mac OS X 10.5 on it. And I was really suprised that I found EchoMac! You can find tons of Windows software when you want to use your PC for some ham radio activities. And there are also some Linux applications which are quite usable. But finding a Mac application is really seldom and finding one with a nice interface is even deluxe!

I quickly filled out the preferences (good that I am already registered) but stuck at the point where I had to enter my password for using the Echolink-service from the internet. It’s more than a year ago when I used it for the last time. And at that time I had a different PC which is already out of order. I tried some passwords and had luck with the third entry 🙂 . Using EchoMac is really easy and so I quickly found DMØZAL-L on the list. I joined the station, but nothing happened. Well, I forgot to forward the UDP-ports 5198 and 5199 to my Mac… After fixing this on the router, I could connect to the station and no second later my transceiver said, that I connected via Echolink. I was impressed!

Tonight I did another try with DO3BOX and we even managed to get Falk DM7FS into the conversation. DO3BOX connected via HF which I tried first as well, but Leverkusen is too far away for a good 70cm transmission with my 5W handheld transceiver – although I could receive the signal quite good. So I switched to the PC, had to adjust the microphone signal and use some headphones for better listening. But it was still too noisy. I am wondering about the fact, that the signal is better on the right earplug, although it should be a mono-transmission. But testing equipment is one of the major parts doing ham radio and so I am not disappointed that our conversation was not that well 🙂

I need to buy a headphone with a microphone attached. Good that the MacBook Pro has separated plugs for AF-in and -out.

I just fetched around 200 QSL-cards from our DOK QSL-card-manager Mareike DO4HSI. These are cards for our D23-crew members at the IARU-contest-location in Büren this weekend.

Contests, Fielddays and other meetings are a good chance for handing out QSL-cards to the D23-members which has been sent to our QSL-card-manager by the DARC QSL-bureau. As I live nearby to DO4HSI it is no problem to fetch the – every time carefully sorted and packed (thanks for the service! 🙂 ) – cards and take them with me to the events I visit. With the help of our preparation-pages in our Wiki (like this for the contest) we know who will attend an event or we ask at our mailing-list who wants to have her/his card proxy-routed by somebody else. This works for a couple of years already and the number of cards increase with the number of members and our activities.

This time I also received two cards! One from Klaus DM2DTH with whom I had a PSK31 conversation on 80m in August 2008 and the other one is from my conversation with DO3BOX last Saturday 🙂